I couldn't fit any more into my last post, but I needed to share this important quilting milestone-- I started Travel Quilt #5 on the train to the NYC Mod meeting last weekend.  (Well, I cut fabric and filled my sewing kit the night before, but I basted the first piece on the train).  #5?  Yes.

See, TQ#1 and #3 are finished (and well documented), TQ#2 is at the long armer's, and TQ#4 is a project I started when I was gathering ideas for Quilting on the Go, but it stalled when we chose to include other quilts.  The rest of the book projects, though mostly stitched while traveling, weren't numbered as such.

I came home from teaching last week full of so much positive creative energy.. I felt better than I have in months.  And I immediately had ideas for two new EPP quilts.  I was able to reign in my enthusiasm and only start one, but I jumped in with two feet and spend most of my free time last week working on it.  The idea was to make 1" hexies from Costas' old shirts.  I ironed, cut, basted, and then.. as I was piecing I realized two things: 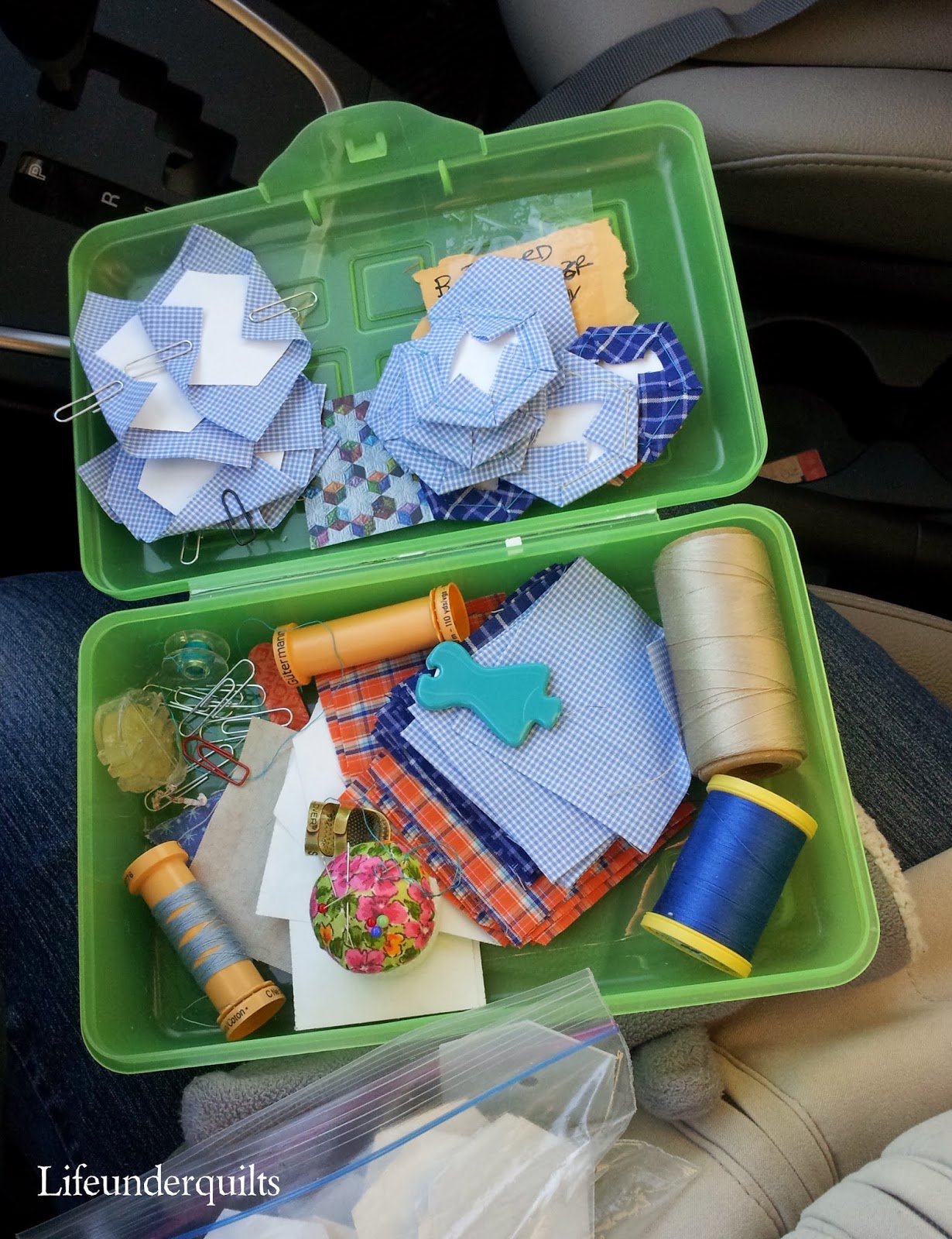 So no, this idea was out.   I still want to make a quilt from his shirts, but it will have to be by machine.  By this point though, I was emotionally invested in making a new EPP quilt, and the pattern was still filling my thoughts throughout the day.  So I just chose different fabric and started another. This will be TQ#5. 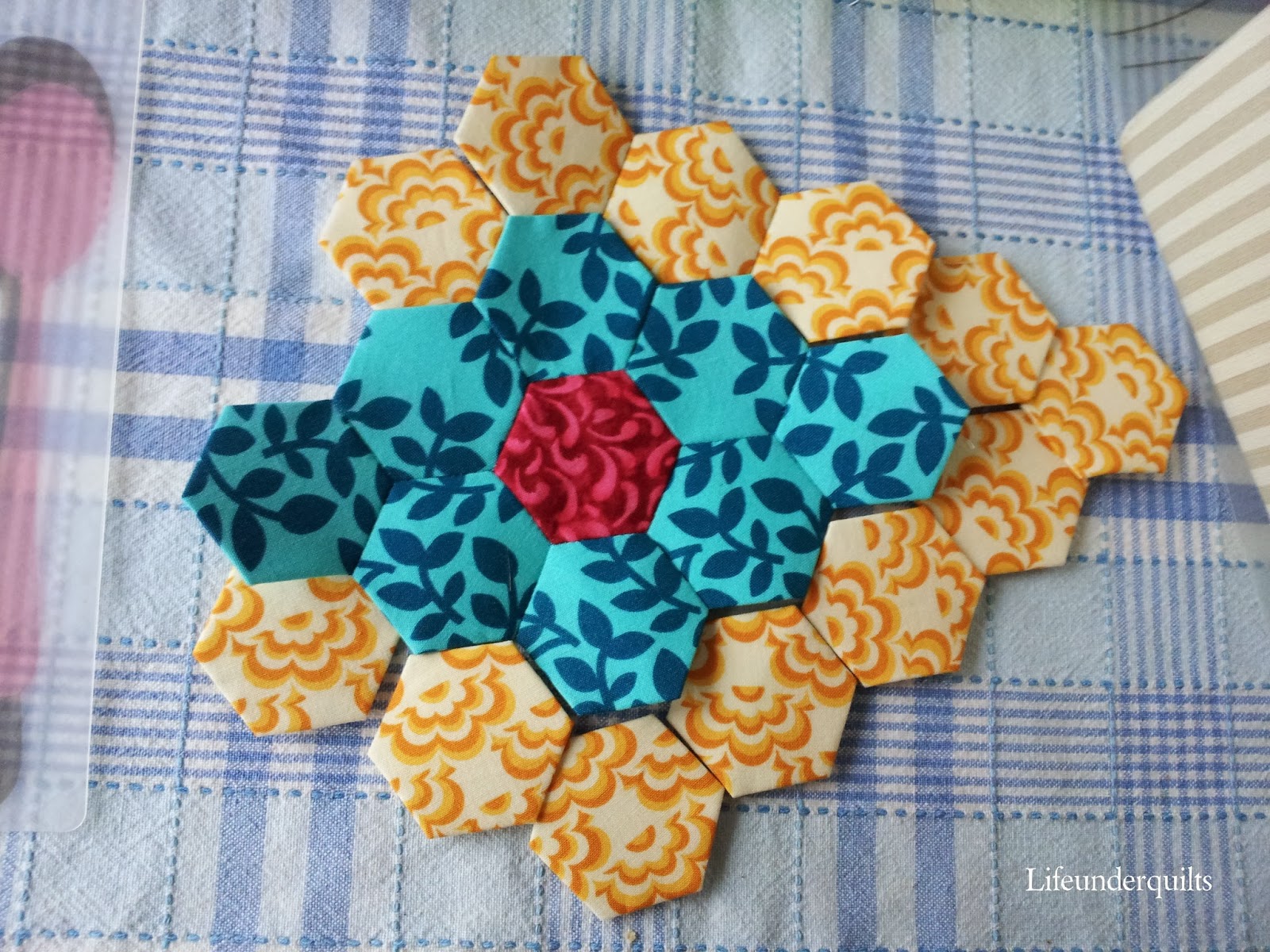 As I was on the train coming home from Manhattan after the guild meeting on Saturday, a family got on and was standing because there weren't many open seats.  I had my box open and was basting these hexies, and a little girl kept stealing glances at what I was doing.  The mother whispered to her to ask me about it, and I invited her to come sit on the seat next to me.  She was hesitant at first, but as soon as I asked if she made things, she dropped her guard and started telling me about the patterns of rainbow loom bracelets she could make.  I told her I made bracelets in elementary school too, but now I make quilts; blankets for the bed. I showed her how I basted and whipstitched the patches together and told her that I wrote a book about it that she could get from the library when she's older.  (She told me she was 6, btw)  I gave her mom my postcard so she'd see I wasn't just some crazy crafting lady on the train, I'm a legit quilting teacher!  I kept stitching as she watched and we chatted, and then she surprised me and asked if she could sew two hexagons together.  Umm, sure!
So on a bumpy train, somewhere between Queens and her stop, I taught a first grader how to sew.  And she loved it.  I let her keep the 3 hexies stitched together, and she asked if we could add blue ones next, but we ran out of time.  I showed her the picture of George sewing on my phone, and told her I was glad to have met her.  Her parents thanked me as they got off at their stop.  And all the way home, my heart was so full.
- February 04, 2014

Travel Quilt #6 and some public crafting

I have been working steadily on Travel Quilt #6 since last fall and it is growing.  I got a chance to piece a few units while I was in Manha... 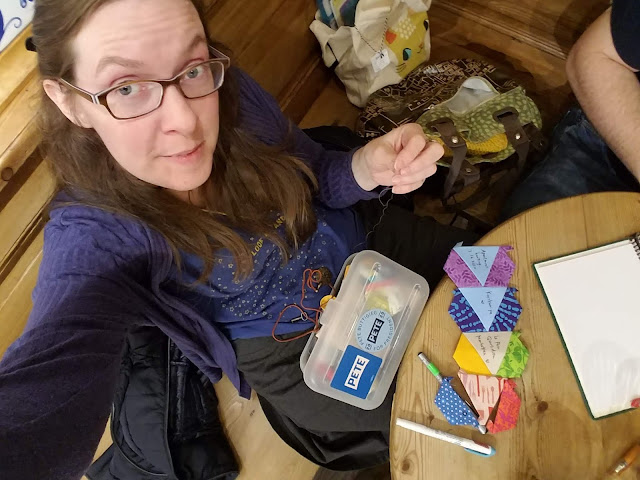 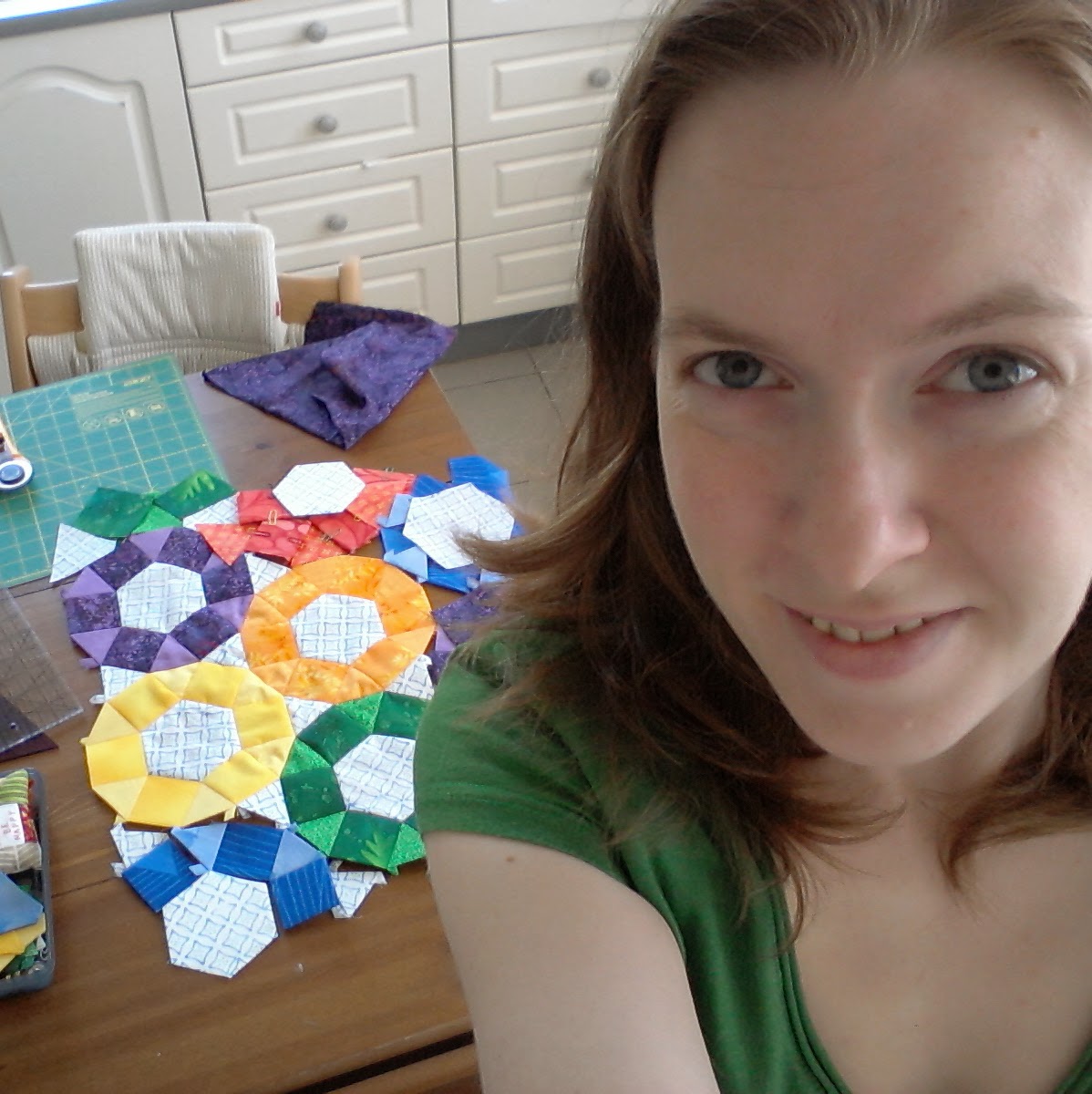 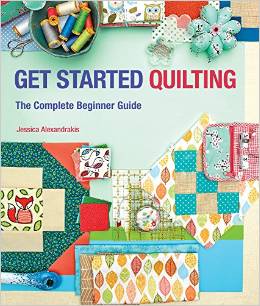 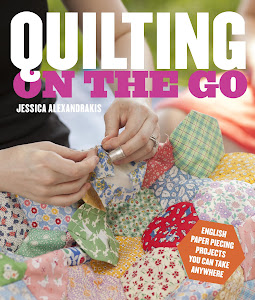 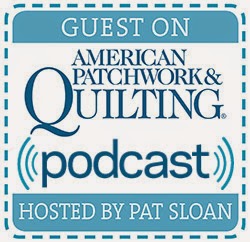